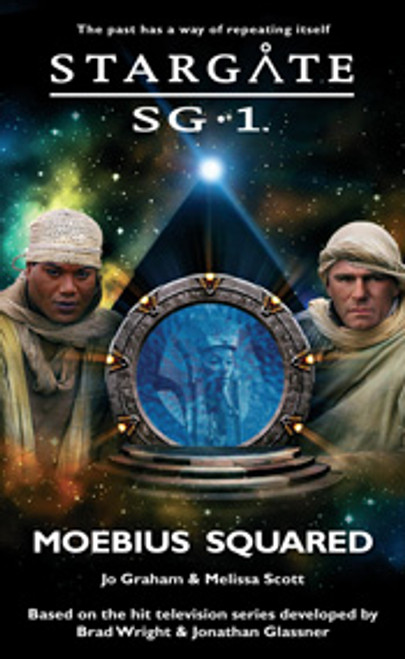 Stranded in Ancient Egypt at the end of the STARGATE SG-1 episode Moebius, Jack O’Neill, Sam Carter, Teal'c and Daniel Jackson are enjoying the simple lives they’ve forged in the years since Ra was driven from Earth.  But life never stays simple for long…

Back in the twenty-first century, trouble strikes the SGC.  With one of their own people snatched by renegade Tok’ra, Colonel Cameron Mitchell leads the new SG-1 on a chase through time to rescue their friend – and to protect their future.

But for Carter, Daniel and Teal'c, the greatest challenge is encountering themselves - and coming to terms with the consequences of their own choices.

“SO THIS...” Cam gestured to the machinery. “This can only move us backwards and forwards in our own timeline.”

“That’s my best guess,” Sam said. She pushed her bangs back out of her face. Her hair had grown out and was now caught in a ponytail at the back of her neck. “Just like Janus’ puddlejumper.”

“I don’t even want to think about that thing,” Daniel said. “Or anything else to do with Janus.” He winced.

“Damn right.” Daniel had only been out of the infirmary for two weeks since his latest brush with one of Janus’ inventions. This one had gotten him kidnapped and electrocuted.

They all spun around as the gate began to activate.

“Firing positions,” Cam said, crouching down beside the control panel. If someone were making a grab for Ba’al’s facility...

The wormhole opened and stabilized, a glittering puddle of blue. Cam’s radio crackled. “SG-1, this is Stargate Command. You are to return to Earth immediately.”

What the...? Cam chinned his radio on. “Stargate Command, we still have a lot to do here. Colonel Carter...”